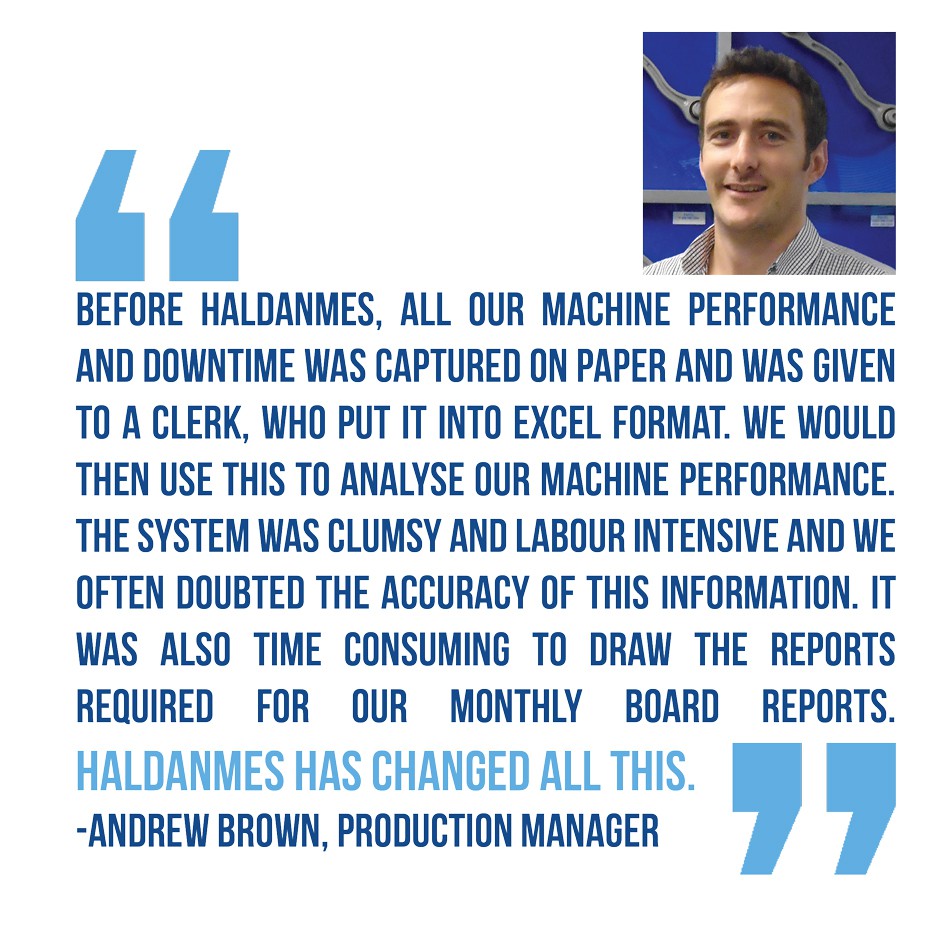 Foxtec-Ikhwezi is a manufacturer and supplier of high volume forged non-ferrous products, based in East London. Their core products are suspension struts for steering systems. 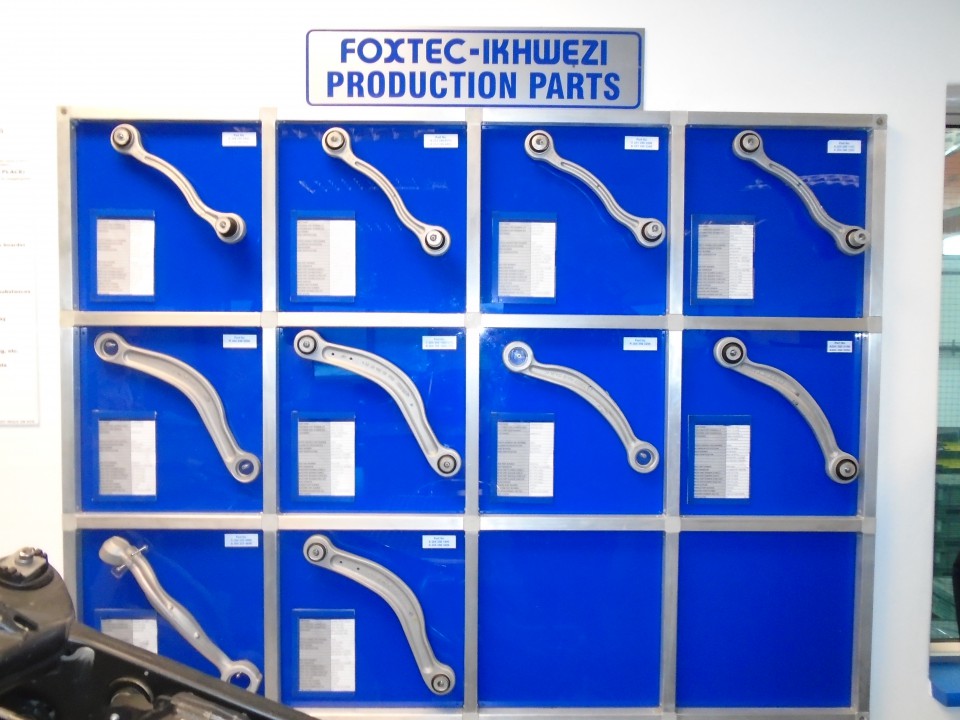 The company was started in 2006, in a joint venture between Otto Fuchs (70%) and Ikhwezi Holdings (30%). Today, with over 70 employees, the factory supplies Mercedes Benz worldwide with 6 different suspension struts and 2 different forged struts as well as 6 specialized AMG struts.

Foxtec-Ikhwezi’s manufacturing process has 9 stages. They monitor their machine’s OEE through the use of HaldanMES. OEE is monitored in real-time, and historical data is available for analysis, from the end of each shift. OEE information for the previous day’s shifts is also displayed on boards on the shop floor, which enables the operators to view previous shift data every day.

HaldanMES has assisted Foxtec-Ikhwezi in improving a number of difficulties they were experiencing on their shop floor. Andrew Brown, Production Manager, believes that their journey to improve OEE has taught the company about the importance of understanding your machines and acting on information compiled by operators:

“Both individuals and teams grow through understanding their machines and focusing on problem areas”.

Foxtec-Ikhwezi understood the importance of monitoring downtimes when they introduced new customer projects on their CNC machines, which meant that time lost to change overs may be doubled. Where they were previously running two different part numbers on their CNC machines, the change in project meant that each machine would be running four different part numbers. However, with the use of HaldanMES, they were able to monitor the time it took to complete each change over. It was clear that the increase in change over times had affected their overall OEE. It was important for them to focus on reducing change over times. 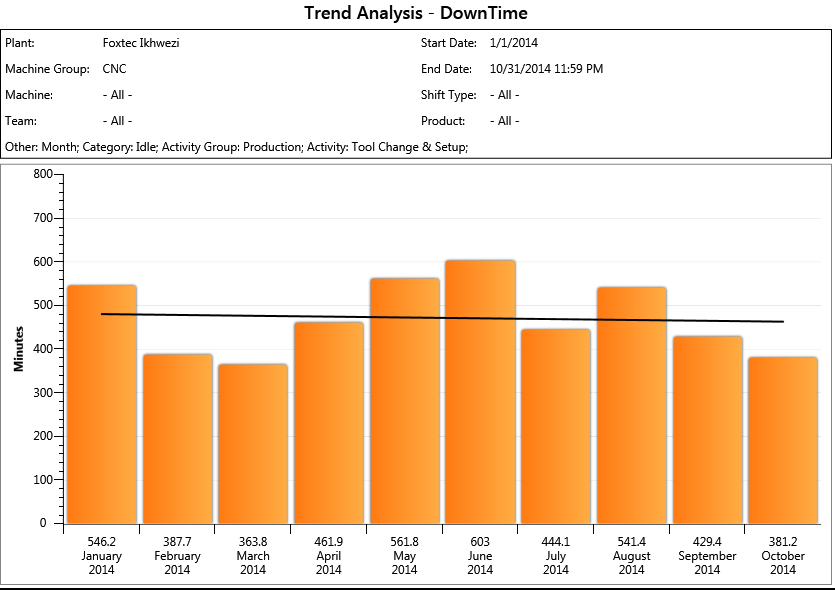 Foxtec-Ikhwezi managed to make this improvement in such a short time frame because they were able to visualise the increase in change overs and what it meant for their business.

With this new project underway, Foxtec-Ikhwezi introduced new DMC laser marking machines into the area in order to mark the parts as per their customer’s requirements. However, as HaldanMES revealed, these lasers were causing availability losses in their OEE when they experienced laser failures. HaldanMES’s Downtime Trend for DMC laser failures was used to track how the machine had performed: 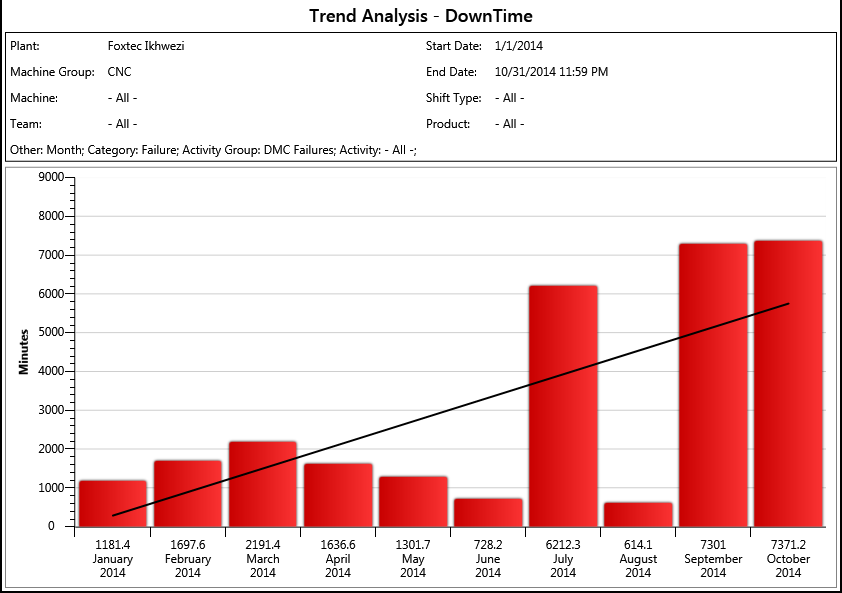 The spikes in July, September and October all represent laser failures. Foxtec-Ikhwezi will now be able to use these OEE reports to justify money spent on holding expensive spares.

Andrew Brown agrees that HaldanMES has made a change to their business. Foxtec Ikhwezi is looking forward to a future of continued improvements, with the assistance of HaldanMES.